The young European ambassadors issued a statement in which they expressed their full solidarity with Batumi Boulevard.

What is cultural heritage and what impact does it have for society?

UNESCO defines cultural heritage broadly as ‘the legacy of physical artefacts and intangible attributes of a group or society that are inherited from past generations, maintained in the present and bestowed for the benefit of future generations’. Its vision of cultural heritage has constantly evolved since the adoption of the 1972 Convention Concerning the Protection of the World Cultural and Natural Heritage (the World Heritage Convention), which covers architectural works, sculptures, paintings, archaeological structures and inscriptions, cave dwellings, groups of buildings, and sites comprised of the works of humans, or of humans and nature, of outstanding universal artistic, historic, scientific, anthropological, ethnological or aesthetic value. In its 1980 Recommendation for the Safeguarding and Preservation of Moving Images, it also recognized audiovisual heritage as part of cultural heritage. (Pasikowska-Schnass, 2018)

Cultural Heritage in Context of the Council of Europe

The Council of Europe (CoE), with its 47 European member countries, focuses its action on human rights and the rule of law and democracy, with the latter including culture and cultural heritage as elements of democratic governance. The 2005 Framework Convention on the Value of Cultural Heritage for Society (the Faro Convention)[1] highlighted the social and economic benefits of preserving cultural heritage as a prerequisite for achieving sustainable development. It broadly defined the common European heritage as covering all forms of cultural heritage put into the context of a shared source of remembrance, understanding and identity. It focused on the contribution of this heritage to creativity and social cohesion, and to the ideals, principles and values resulting from the experience of past conflicts and efforts to make progress.

The inclusion of cultural heritage in the EU Treaties resulted in the EU’s first steps in support of culture and the launch in 1995 of a specific action program devoted to cultural heritage. Between 1996 and 2000, this program aimed to promote cultural heritage and access to it, to help establish networks and partnerships, as well asto encourage cooperation with third countries and international organizations such as UNESCO and the CoE.

A large number of European Union policies, programs and activities contribute to preserving and developing cultural heritage. A first mapping of policy initiatives and support actions undertaken by the European Union in the field of cultural heritage, was done in 2014[2] by the European Commission with the aim to contribute to the development of a strategic approach to the preservation and valorization of European heritage. A second edition of this document was published in August 2017[3].

In Italy, the Distretti culturali (cultural districts) call issued by Fondazione Cariplo (charitable foundation) in 2007 has been a huge matching-grant program aimed at producing new attitudes toward culture as a factor for local development. More than 60 Million Euros have been invested in six financed projects in different areas of Lombardy region. Each project included several actions, some related to tangible heritage, some to intangibles, some targeted at governance and communication. The aim was to involve private sector and supply chains, which usually are not involved in cultural processes. Distretti Culturali program aimed at going beyond the normal assumption within the Heritage sector that the problem is just to collect money to pay conservation costs, and that Heritage makes money directly through valorization and tourism.

In fact, this project increased employment and enhanced skills. The main challenge has been to improve skills and also to change the mind-set about the link between economy and culture, with a special reference to the economy of heritage. The crucial test in measuring the success of this model will be the capacity of local systems to set up new projects and new alliances, which will enhance the territorial capital in cities and/or regions. The financed projects have been tailored to the characteristics and the opportunities of each place, thus developing the model both for networks connecting small towns as well as for urban contexts where inclusive and innovative actions have been promoted.

Batumi Boulevard, Cultural Heritage Site of Seaside City of Georgia, is in Danger 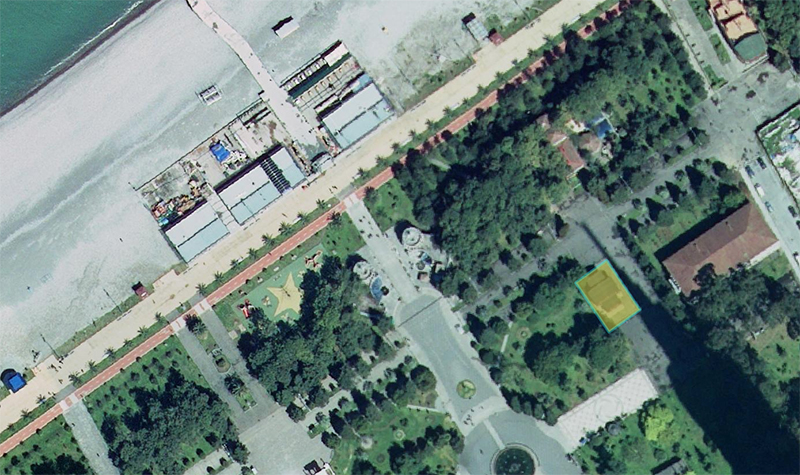 The culture and history of Georgia is the valuable and greatest treasure of citizens of Georgia, which we inherited from our ancestors and which we all together must protect and take care of. However, Batumi Boulevard – a cultural heritage site that created the identity of the city, is in danger now as a construction of yet another hotel has started without considering international experience, obligations towards the international conventions and opposition of civic society.

People of Batumi City are holding protest rallies in front of the historical colonnades of the seaside boulevard today in order to once again protect the cultural space of the city – Batumi Boulevard from destruction. Not to be left out and to be once again reminded, Batumi Seaside Boulevard was granted the status of a real cultural heritage monument on February 21, 2011 by the order of the Minister of Culture and which is protected by the Law[4] on Cultural Heritage. Considering the fact that since 2011 Georgia is a signatory state of Faro Convention together with many other international conventions, the country is obliged to protect the cultural heritage and to regulate legal relations originating in this field.

In addition to that, since the international organization ICOMOS highlighted the threats of destruction of Historical Batumi Urban Heritage in the World Report 2016-2019 “Heritage at Risk”[5], the issue needs even more to be taken into consideration.

In this article Young European Ambassadors would like to highlight the importance of cultural heritage sites together with the environmental and urban threats posed by the construction of high-rise buildings along the boulevard.

To start with, I feel very much responsible for taking care of the historical and cultural wealth left by my ancestors in my city and taking my part in protecting its uniqueness. Secondly, because I want to live in a city which has its general plan for urban development, where construction is not chaotic and illegal, and where projects are being implemented primarily for the benefit of city residents. Thirdly, because I owe it to myself to speak out against injustice in order to believe that fighting for a better future always makes a sense. What is more, it is critically important to take into account the challenges of today and to optimize the urban development of city to the modern approaches. Besides construction of new towers, the modern city needs to invest more in young people, develop the culture and creative sector at the local level, encourage innovative ideas and create a smart city, which should be planned in accordance with the interests of society.

Cultural heritage sites preserve our identity, character and history. Maintaining and passing them on to the next generation is vital. We often hear these words and no longer attach much importance to them. But it is in these heritage sites that the past lives with us. They remind us of who we are and where we come from. By destroying them we destroy our history and leave nothing to the next generation. Batumi boulevard must be preserved.

Boulevard of Batumi, which is monument of national cultural heritage and unique place for everyone, for people, including young people to express themselves. Such space cannot be destroyed. While Europe tries to protect, expand and multiply green and public spaces so that we, young people and future generations can live in a healthy environment, the planned construction in Batumi Boulevard contradicts to the European view. Also, this construction is an inverse response to the UN Sustainable Development Goals.

Batumi Boulevard is for everyone, for citizens of Batumi, Adjara and other Georgian citizens. Also it is open for citizens of other countries living in Georgia, visitors and tourists. This is an unifying and integrating public space where everyone must have the opportunity to socialize in.

Public recreational cultural spaces are city and country authenticity-keepers. It is there that one can see, how do people in a given society rest, entertain and relate to each other. Therefore, if we truly are concerned with “sustaining our Georgianhood”, we shall be nurturing public spaces. Common public spaces are also of key importance for democracy and equality. People from all walks of life with diverse ethnic, racial and religious background, with different views, of multiple professions and social classes gather there. They watch each other’s behaviors, trying to understand, exchange their ways of life and world views even non-verbally and motivate each other to maybe try something new or change opinion. If such spaces shrink or disappear, the residents of the poorer neighborhoods will not be able to walk beside the richer and the other way around. This will separate and divide people even more.

Due to the fact that the air coming from the sea circulates in the city, any infrastructure project implementation on the coastline can cause significant damage to the environment. Specifically, regarding to this project, it must be interesting to what extent the Environmental and Social Impact Assessment (ESIA) is conducted and what type of risks and mitigation measures are proposed. What is more, it is essential to know whether the company will comply with the regulations in order not to scatter construction waste throughout the city. Taking all above into account, one of the most key environmental damage would be an air pollution which will lead to a reduction the number of tourists on which the income of the city’s residents depends greatly.