Music genres can affect our psychology

There are many contradictory theories about the effect of different music styles. For example, some say that hard rock and metal music make you violent, others admit that rock music fans are one of the friendliest people ever, but again… after some rock concerts people leave destruction.

The information is opposing about many other styles as well. Mainly because there is a piece of truth in all theories.

For example, one of the most famous experiments is Dr. Masaru Emoto’s experiment of intention towards the water. Exposing water to negative and positive intentions of thoughts, feelings, words, music, and even photos. After testing many samples of frozen water crystals, he claimed that water crystals that were exposed to negative intentions were ugly. But those with positive intentions were beautiful. It is interesting that the water which was treated with heavy metal music appeared deformed but the one treated with classical music appeared symmetrical and beautiful. 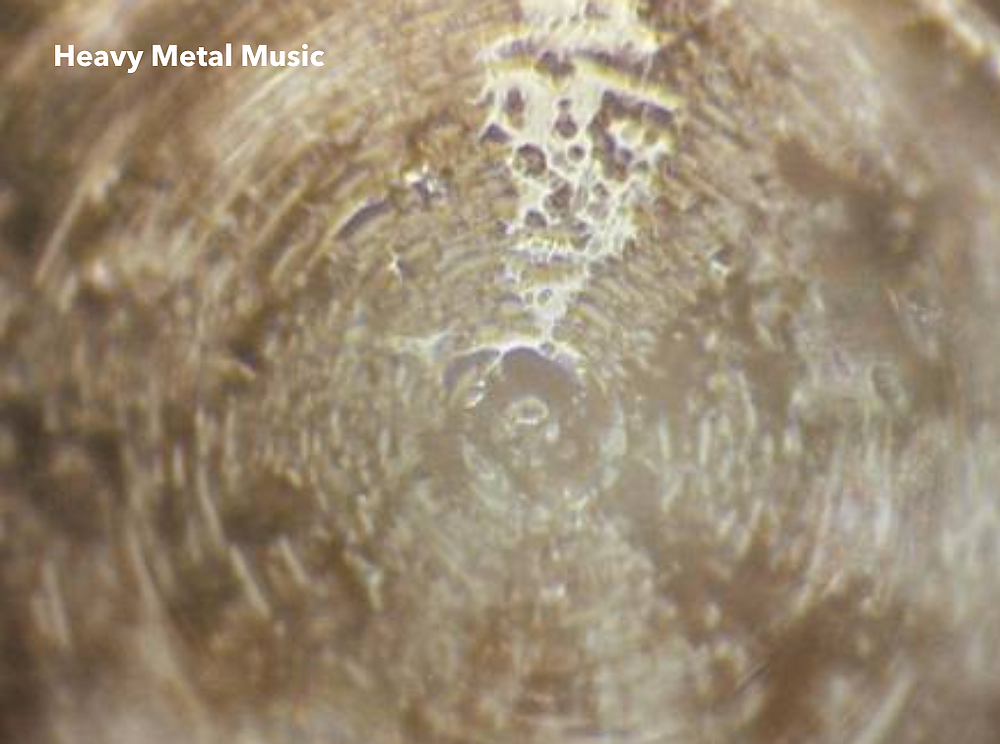 The results definitely suggest that listening to heavy metal is damaging.

But Dr. Emoto has also been criticized for insufficient experimental controls, not sharing enough information about the experiments, and doing them in a way that leaves the results prone to different kinds of interpretation and mistakes. And his ideas have been commented as not scientific enough.

For every experiment that has been done, there’s a possibility that the results of other scientists that comment the work could be wrong. We can not escape the false perceptions but there are ways how we can look into this topic deeper to help us understand it better.

One simple experiment you can do yourself.

In three (or more) glass jars put an equal amount of unboiled rice and pour an equal amount of distilled water (many people have also used filtered or boiled water) on them. Put them in a place with the same amount of light and oxygen at least 20cm apart. For thirty days at least one minute in a day say to the first jar “I love you”, to the second “I hate you” and ignore the third. To make this more interesting try with different music genres.

Also to understand the effect of music you need to ask many questions to yourself.

Musical compositions attract us with the presented story of a certain kind of emotions created by rhythm, pitch, loudness, melody, singer’s voice, the meaning of the lyrics, and the message of the video clip or other visual arts.

All these things resonate with emotions and life experiences. And different music styles represent specific emotions that we carry inside us or are missing.

The music that we like is not coincidental and exploring it will help us understand ourselves and the world around us better.

In order to understand the effect of music genres, first, we must explore what makes us want to listen to music anyways.

When talking about music, there is never a simple answer to what is “good” and “bad”.

1.People can get addicted to a certain kind of music.

“Life is layers of patterns that constantly interact with each other in a hopefully relatively harmonious way. And music partly mimics that in an abstract way.” Jordan Peterson

When we try a pattern that comforts us, we usually stick to it. It doesn’t matter if it benefits us. Because pattern leads to the safety of an expected result with minimum input of unnecessary waste of energy by thinking and new emotions. ( that’s one of the reasons why people get addicted to cigarettes, alcohol, and other…) And people also get addicted to certain kinds of emotion. Even if it is sadness. So… think about it.

And another thing that makes us addicted is that we like to find an escape in certain genres and songs, to stop thinking about our problems. If it happens occasionally, it’s not bad. But pay attention to how often and when you feel the need to escape.

“…some songs can negatively engage our attention, as we become part of the song’s story or scene. Lyrics are descriptive and engage our analytical mind, and lyrically heavy music could divide the attention of many people’s brains.”

So… a four-minute song gets us in by one type of emotion throughout the song with almost no effort of thinking. Simple and fast. Seemingly perfect for our busy days that we have. But not always the best solution.

In my own experience after working ten hours in a shoe shop, I had to listen to the shop’s pop-music playlist all the time. Before I started to work in a shop I mostly preferred silence while being at home. But soon after starting to work, I wanted to listen to pop and dance all the time and slide into non-thought numbness. The silence was difficult to bear.

I’m not against pop music or dance or other modern music genres. I enjoy plenty of songs from these genres. But ten hours a day was too much to the point that it became harmful.

Music also helps us to express something that we can’t express ourselves. Even some feelings that we can’t define and pinpoint by ourselves. The song feels what we feel and sings it loudly. That helps us feel liberated from the feeling that we don’t like or makes us feel positive emotions even more strongly.

We should pay special attention to the emotion that is attracted to the song or melody. And what in that musical art peace creates that emotion. Because if it’s negative and it repeats that shows us problems that we need to solve.

Some songs we find likable or unlikable because of the associations with good or bad memories.

“Music is a delivery system of frequency to the mind. Each note has a specific frequency, but we can also embed additional brain wave frequencies outside of the standard notes into music to allow the brain to entrain to our desired states.”

Our intention also affects the result we get from the music. If we listen to some melody or song that we know will make us feel better or worse, the effect of that will be stronger than randomly heard peace. And the heard music strongly affects how we perceive other people’s facial expressions, body language, and art, more positively or negatively.

In an experiment to test how music alters our reality, the participants had to choose songs that make them happy and sad. The material widely varied between subjects (e.g. ‘Under the Bridge’ by The Red Hot Chili Peppers or Mozart’s ‘Requiem’)

Some people’s intention is to be challenged. “The more complex the music is, the better and I can listen to it more. I sometimes even choose the music that in the beginning, I can’t even understand” Jordan Peterson.

Depending on a person’s mental disorders and severeness of them even the smallest details of a musical art peace are very important and can lead to extreme changes in behavior that can help or make the state worse. In some cases even lead to hurting others. The rhythm, mood, intention, and lyrics (if any) are very important.

In an experiment done in Japan, Japanese 5-year-olds drew for longer periods of time after singing or hearing familiar children’s songs, then after hearing Mozart or Albinoni, and their drawings were judged by adults to be more creative, energetic, and technically proficient.

But the psychologists also didn’t deny that possibly with more active classical music the results could be different.

There is something that can benefit and harm us in every music genre. It all depends on how alert we are about our reactions, and how able we are to regulate what and how much we need.

A good way to do another test is to try some audio illusions on the Internet. To test how our personality and different life experiences change to what we hear.

More about music and our emotions…soon!

How does music effect plants? – https://youtu.be/C5dNhNfGyWQ